Growing Up on a Farm in Kansas

What was it like to grow up on a 400 acre farm in Wilson County, Kansas? This excellent story will give you an idea and perhaps bring up some warming memories of your own.

When you live on a 400 acre farm, you entertain yourself as a child – such as playing cowboys and Indians in the timber, shooting your BB gun at frogs at the ponds, playing basketball in an empty hay mow of a huge red barn, and fishing for bass and bluegill. We worked hard at putting up prarie hay and alfalfa during the summer, so we could feed the cattle during the winter. As we looked skyward during the cold dark nights feeding the cattle, the stars were so very bright and vivid. The coyotes howled as they stared at us from the edge of the “crick”. The school bus would pick us up and drop us off at the end of the driveway, which was 1/3 of a mile long. We literally walked in all types of weather, rain, snow and ice to get to the school bus. It was then an hour ride to school on the washboard rural KS roads. In the summer we would pick wild blackberries for pie and wild sandplums to make the best jelly. Time marches on, but the memories that this homestead provides to me, continue to inspire me today. 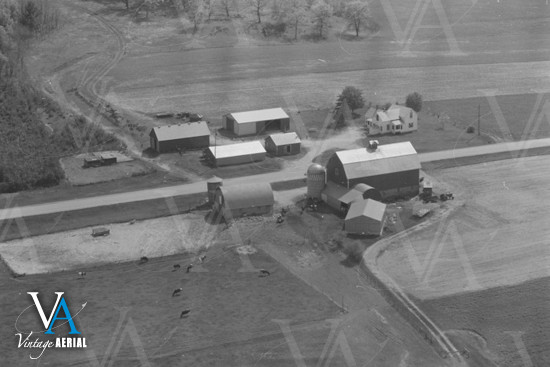 This 1988 photo shows some of the changes since the 1973 photo I commented on. The dairy cows are still in the pasture and those same fields are being worked by the fifth generation of Oplands since the farm was settled in 1892 by my great grandfather. My parents still live in the original home where my dad was born and raised. Thanks for another great glimpse back in time! 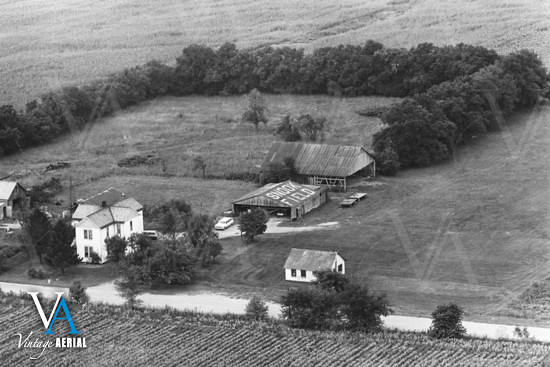 My Grandparents bought this farm in 1935. Two of my uncles had an airport here until the mid sixties. My grandfather raise register Brown Swiss cattle until he passed away in1957. It is now a housing project that was built in then 90’s.

A great story from Becky in Story County, Iowa. I wonder how many of our photos have buildings that are no longer standing due to tornadoes? 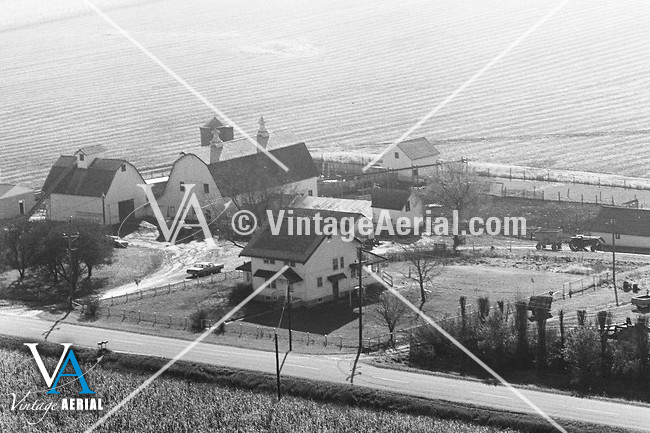 This farm was owned by my dad, John McCann, at the time of the picture. The map is slightly inaccurate as the property is on the southside of the road. Nearly all of the original buildings were destroyed by a tornado on June 13, 1976. - Becky McCann Leuenhagen 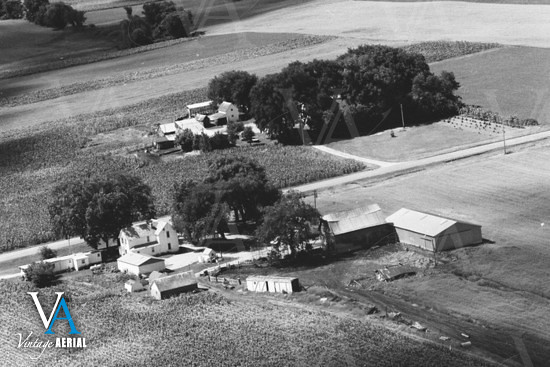 "This is the back of my grandparents farm, I can not even express the emotional feelings I felt when this came up on the screen. I am so glad I found Vintage Aerial! Debbie Uecker

Even the shortest of stories will never get old. (Read more here.)

"I will surely treasure it for years."

Thank you from the bottom of my heart for the beautiful photo you found for our family. The photo of our farm was special to my Dad, and I’m glad he got to see it before he passed away. Our family farm was his most sacred place on earth….the land he lovingly farmed….that once belonged to his parents and his grandparents as well. So, this beautiful image is already hanging on my family room wall and I will surely treasure it for years. 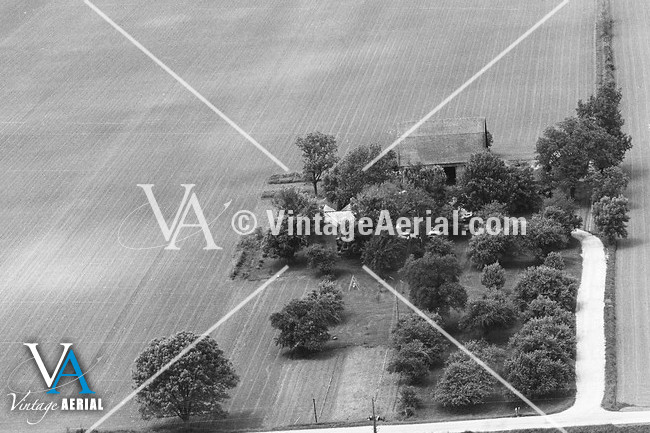 Special thanks Tom for your help in finding the photo. Special thanks to Paul and Lisa Clark for visiting me at Dad’s funeral and for your friendship. The photo was proudly displayed at his wake and all of Dad’s brothers and sisters, family members and friends got to share in the memories that Dad’s farm has provided over the years.

*From our Featured Stories page from a thankful Vintage Aerial customer.

A Mug from Heidi

Yesterday one of our veteran librarians, Tom Wolff, got a wonderful gift in the mail from a grateful customer. Heidi Fahrenbacher wrote about the customer service she got from Tom on her blog. Here.

"It will be cherished by my family for generations to come..."

When we came across this story from Sherrie we couldn’t help but share it on the blog. The photo is wonderful and the story really brings it to life. Thanks to Sherrie for sharing! This is why Vintage Aerial exists. Enjoy. 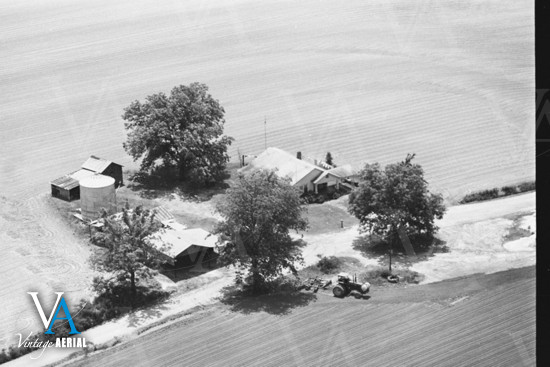 This land, located approximately 10 miles north of Ashburn, Georgia, off of highway 41, was first owned by J. H. Odom. Upon his death in 1943, his heirs were given property per his will. My grandmother Corrie Miles Odom Collins was his oldest daughter of 11 surviving children. She received 166.2 acres for the “sum of $5 and other valuable consideration” in Turner and Crisp County. This deed was signed on April 3, 1948. The land was used for farming and to grow cows and hogs and raised a family with a girl and 2 boys.

Where the tractor is in the picture was one acre that my grandmother sold to my father, Donald Gene Collins, for the sum of love and affection when he and my mother married in 1966. They bought a TINY single wide mobile home and lived there until 1976. I was born in 1968 and my brother was born in 1974. We lived here until we moved to Rebecca Georgia in 1976.

We had a wonderful finish to the year with all of our Christmas orders that came in. With that in mind we wanted to share a few thoughts from a customer reflecting on their experience with our company and product. We are truly thankful for our customers, especially when we receive feedback like this! Enjoy.

I recieved the photo yesterday. The frame is very nice and the picture looks great. Even for being over 40 years old, you can still make out some of the details. There is a Moline combine parked in the barn that I did not see when we previewed the picture. My dad has spoke about having that combine when he was young but we never had any pictures of it. I think the purchase process went well and is easy. I enjoyed being able to preview the picture and seeing some of the neighbors farms as we flipped through to find ours. I am excited to give it to my parents for Christmas. I would definitely recommend this to my friends and family. Thanks, âBrad Johnson

(To read the story & see the photo go to our Featured Stories Page. )

Here at Vintage Aerial we are constantly hearing stories of many people from rural America. As our company grows more and more people are sharing their stories through conversations and on our website. Every time a customer has a chance to see their photo you can almost feel the wave of emotions and memories that come to mind and form their story. (more below) 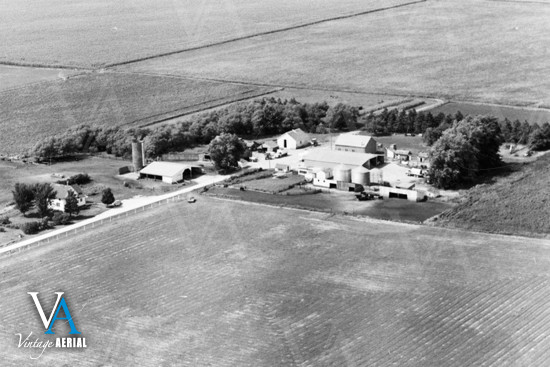